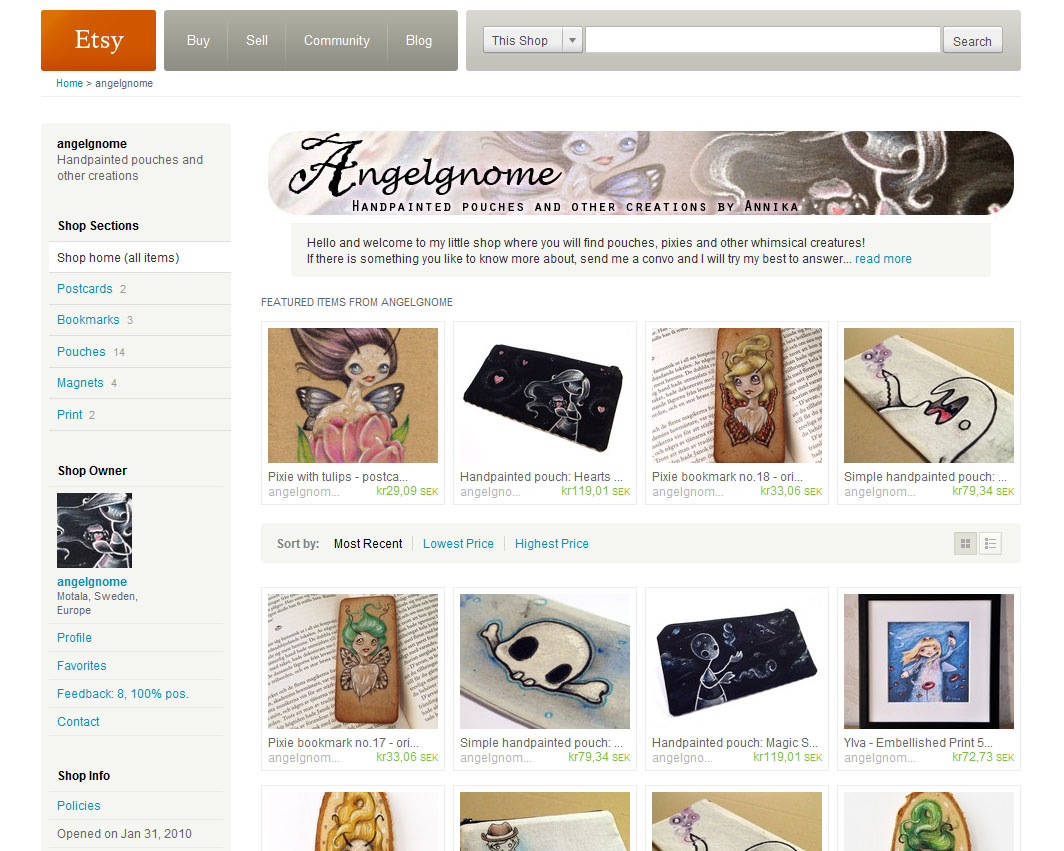 Today I'm celebrating my etsy shop turning 1 year and even tho I really started tending it these last couple of months it still feels like something to celebrate!
Also my birthday is coming up and so is Valentines day! So February is a festive month!

So in honor of this I have decided to give you a 5% off coupon for my etsy shop and it will be active throughout February.

Please note that this code only works for my shop only, so redeem it at angelgnome.etsy.com
You can learn more about how to use Etsy coupons here.


If you have any questions please feel free to ask!

There will be other celebrating things this month so keep a look out!

Thanks for looking!
Upplagd av akinna kl. 22:16 No comments:
Email ThisBlogThis!Share to TwitterShare to FacebookShare to Pinterest
Etiketter: etsy shop Pixie no. 1 - Sold
Another Sunday and as you might have guessed this post is going contain photos of the Pixie magnets I made back in 2009. Pixie no. 4 -Sold
I have shown some of them back then but I uploaded them too my flickr today so I though I let you see! All in all there are 10 pixie magnets from 2009 so check out my flickr to see them all. Pixie no. 7 - Available here
They are drawn with colour pencils with details and highlight with a white gel pen and fineliner pen. This first batch is drawn on rough wood but now days I sand the surface before drawing the pixies. I also have been adding 3D gel on the eyes to give them that little extra but now I'm not sure whether or not to continue doing that. Pixie no. 9 - Sold
So that was what I had for today and if you have any question feel free to leave a comment! Pixie no. 8 - Sold
Thanks for looking!

More WIP and A Vampire Lord It's Sunday and it's been another slow week here when inspiration just haven't been working properly or rather my energy is gone. But I know that January generally is a down period for me and I'm staring to accept that that's just how I am. I still have lots of ideas tho and it's not like I haven't done anything... just feels like it! :) The above pictures is how far I've come on the canvas pixies. There is still lots to do on them but I thought it might be fun too see how my painting progress goes.

I have been adding new things to the shop and among them is this little Vampire Lord.

I have prepared a new batch of the white fabrics that is waiting for me to paint on them and I also have more black once to finish so we will see where I will start!

An embellished print off Kelly-Ann in etsy shop now

Hi there! Just wanted to let you know that I added Kelly-Ann to my shop today and Ylva will be added later this week.

They are both an embellished print which means I added some extra touches after printing by hand such as glitter. I also have added details in colour-pencils, fine-lines pens and white gel pen. Here is Kelly-Ann with her little white cat.
I probable forgot something so please feel free to leave a comment if there is something you like to know! And here is Ylva and a butterfly!
Now I'm off painting some more on the pixies from my last post! And there is still no pictures of my pixie magnets but I'll get there eventually! ;)

Whoopee... It's January and the first Wednesday of the year... not that anything special have happened today... but still! ;) I haven't been doing very much these first days of the year... mostly sitting here in front of the computer procrastinating. Or searching for inspiration and making mental notes of what I want to be doing this year. No clear plans so far but lots of ideas at least.

So as you might guess from my all so cleaver headline and the pictures in here I wanted to show you some pixies. These will be/have been painted with acrylics on deep edged canvases that have two or three layers of brown paint as base.
The small ones are the new (if you couldn't tell) that I started today and the pixie with the pink eyes where made for my sister's 25 birthday in May 2010.
That one is pretty big, 40cm x 50cm. It is one of the biggest things I painted/drawn since school and it took quit a long time to get done. The flowers are suppose to be calla lily's. I use my brown shades of Derwent soft drawing pencils to sketch out the pixies and make shadows and highlights before bringing out the acrylics.

I haven't decided yet how I want the new pixies to look, maybe they will have a more sketchy look then the other but I guess I will get a better feel of them once I start working on them again. I actually have done more on the pixie on the left but unloaded the camera before thinking
of taking another photo.
On a whole other note I just realized that I haven't posted any of my pixie magnets on flickr. I have shown some on here but considering that I made more then twenty so far I do feel a bit bad for keeping them to myself. Or well... most are already sold, so don't know where that leaves us! ;)