Yes winter finally found it's way here! Almost felt like picking up a little sledge... almost! ;)
So today I went for a little walk with our dog Ronja and this time I did bring my camera and took some photos of all the snow and of Ronja...haha! 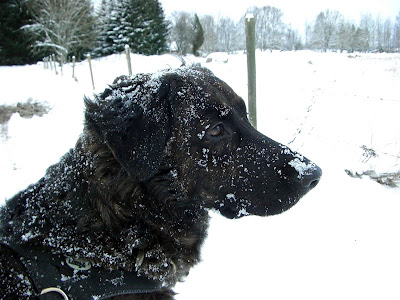 Haven't been doing much today other then surf the net. Been trying to get back into the swing of things at deviantART but have lots to go through there but I think I will try my best to update my gallery there (it's so out of date). Last night I spent some time deleting some of the things there and sent others into the scrap album.

But yesterday something else very exciting happened (that made me very nervous)... The journalist Linda and photographer Åke from the newspaper Corren was here to write a story about me and my mother Yvonne! The journalist had seen us at one of the fairs and really like our creations and wanted to know more about us. But as I said... we where really nervous and especially for the photographing... hehe! I like taking photos NOT being in them ;) They where however really nice and everything went fine and it will be exciting to see the end result in a couple of weeks. Exciting but also a bit scary!!!

This next picture I had planned to show you on December 13 (on Lucia) but since I spent most of the weekend being nervous I will show you now instead. ;) 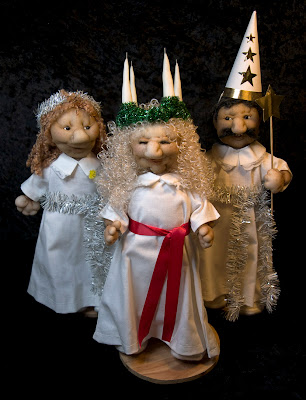 I have show them before but I took some new photos of them after the fairs.
So that all I got to say this time!
Thanks for looking!

Now the Christmas fairs are over and I like to thank all of you that have found your way here because of them! Tack ska ni ha! :)

As usual I forgot to take out the camera at the fairs but here is one of the angelgnomes I made for the fairs. This i Ellinor! 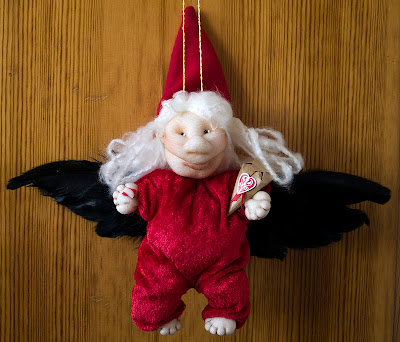 I don't think I have mention this before but I actually have another blog together with my mum Yvonne, Spiksborgs Art & Design ! We only write in swedish there but feel free to have a look.

I know that I am a bad bloger but I would like to change that but having something interesting to tell is always difficult so any suggestions or questions are more then welcome to help me improve.

There are some plans going on behind the screen and hopefully they will be happening soon so keep on checking in for updates!